It was a good day to have the RedNeck ride, 'cause flyin' was out of the question.

Grubby weather today, with more SE 20kt and rain forecast. Great weather for pirates, though, because you can pretty much guarantee that when you finally get where you are going, chances are very slim that you will see anyone else crazy enough to be out in this crap. Once again, a hearty "Thank You" to all of the fairweather fishers of the world. Stay home, you ain't missin' a thing.

At any rate, the gettin' there sucked, and the gettin' back sucked even more, but once we got there, the getin' was good. And get we did.

The Fanz, proving once again that cheap crap in the right hands will outfish your ass on a downright predictable basis.

Our beautiful first-cast dance partner, giving us the 'Ho eye.

We lost track of time just like we lost count of fish - easily, because it doesn't really matter. When it's done, it's done, and that's when you leave. Daylight is only necessary to be legal, and as long as your GPS has batteries you can find your way home. Today it was done early, and we were done as well. Back into the ride, back to home.

With work on the wane and coho numbers building, things are getting interesting in SE AK again.

Cut out of work early to catch the incoming tide and to see if the freshies wanted to dance. A gnarly SE front was scudding in, in wet, blustery contrast to the idyllic conditions of Tuesday. After a 20 minute ass-pounding ride out to the promised land, we rigged up and started fishing, rockin' and gliding in the 20kt wind.

Soon after, the first push of fish showed, with a herd of seals following like cops at a demonstration. The seals had the fish all bunched up, which was cool if they were within 60 feet of the boat, but it kinda sucked when they were runnin' them all over the bay and a fella had to motor to keep up. At any rate, after a few false sets, we got right into a lane and made a game of it. After a hectic 2 hours, we called it quits and pounded back to the ramp to clean up and get all gussied up for the evening's fun. 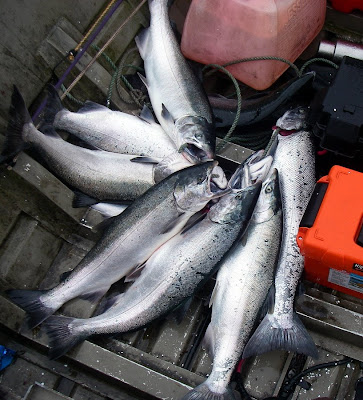 TU and Why Wild Put on a bitchin' doubleheader last night, serving up a wild Bristol Bay sockeye BBQ for about 200 folks, then capping off the evening with the SE AK premiere of Red Gold. In case you have been living under a rock for about the last year, this flick is a powerful statement of a place, a culture, a lifestyle, and an economy that is under siege from the hardrock mining industry. Travis and Ben managed to capture a lot of both the good and the bad in this film, so hopefully it will get out to the wider world for folks to see just how cool that area is, and just how potentially bad a project like the proposed Pebble Mine really is.

Lauren Oakes, whose job titles include TU AK staffer, head filmmaker wrangler and King Salmon Queen, sits still for a moment for a photo with Travis Rummel and some fish guy with a crappy blog. 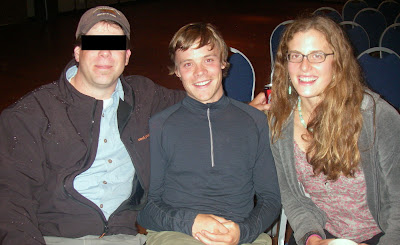 After the show, which was very well received by a packed, standing-room-only crowd - and following a short, painful Q&A session for Travis (sorry, man...some folks still don't get the "documentary" thingy), we adjourned to the local adult beverage dispensary for an after-show BS session.

Lauren and Travis are off to Sitka today, and Timbo took his copy to Petersburg in hopes of enlightening the squareheads. Solid showing last night, with more to come before the State Primaries on the 26th.

Thanks for the effort, fellas.
Posted by G_Smolt at 8:13 PM No comments:

Holla at a 'Ho

It seems that the sun has been relegated to cameo roles the last few months, coming out at random, unexpected moments to brighten up the otherwise monochromatic oeuvre that has largely defined our year here in SE AK.

Yesterday the sun chose to flex its muscle and demand equal billing with rain, clouds, and the new big-shot in town, Fog. Sun's manager should be applauded, because we got a full afternoon of sunshine only lightly interrupted by high overcast.

Hmmm...sunny, wind N 3kts, seas 2ft or less...sounds like RedNeckin' weather, so we loaded up the sled and went out lookin' for some salty 'ho.

The Fanz was the man of the hour, hooking 2 fish before we even had our rod rigged up. After that, we got our licks in for the first 45 minutes or so, but closer to the tide change the fish started cruising a little deeper. Our fly selection was pretty sparse, mostly lightweight stuff to be thrown with sinktips - perfect for the conditions, a fella would think. But the fish told us otherwise. They wanted bigger flies with heavier heads, thrown on floating line and retrieved all herky-jerky like. After watching the Fanz pick off a half-dozen in a row, we wrestled him to the deck and stole his flybox, holding on to it just long enough to get at one of those big, dumbbelled thingys he was throwing.

Things went better after the fly-change, and after a few moves to pattern the fish, we called it a day and glided back to the ramp on a mirror-flat afternoon bay, heavy with meat. 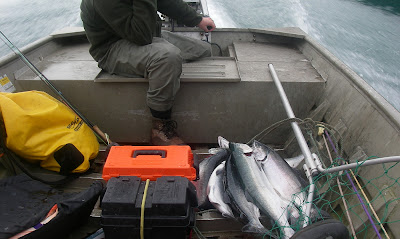 You won't see this in the Olympics

The Summer Piscine Biathlon has run its course, and the newest member of the Lynn Canal Pirates Association has flown his colors, played the game in SE AK, and lived to tell the tale.

Ratbone needed just 72 hours in-country to complete the course, and early tallies indicate that the volume of alcohol consumed and the total numbers of fish caught were sufficient to rank this performance alongside the all-time greats.

Although handicapped by a beater truck, a few pages of a phonebook map with unintelligible scrawl, and strike indicators, he managed to pull off a win on the local flows under questionable conditions. Capping off the day with much beer and pizza, plans were hatched to make a go at the Mist Valley the following morning.

And the rest, as they say, is history.

The trail is still as hairy as ever...literally. Lined with shed fur, and paved with poo both old and new, it is a reminder that you are in a place that most folks can't even comprehend.

The fish of the Mist are still there. Big, violent, and hungry as hell. If you don't bring an 8wt an 15 lb test, you are in for a very long day.

After the initial sensory overload, it was game on for 6 1/2 hours.

Words won't quite do it justice, so we'll let the pics speak for themselves. 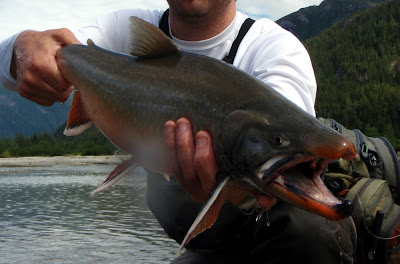 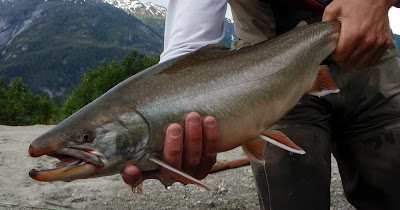 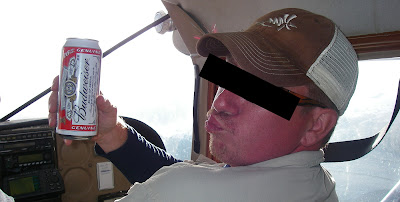 Some things, some experiences, they just don't translate well to the written word.

If you were there, you would understand. 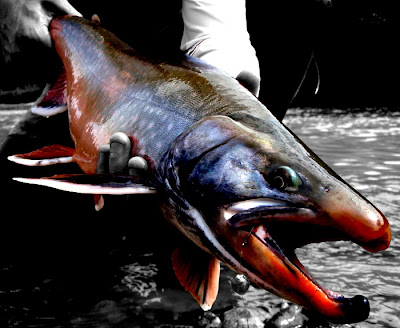 Don't Hate on a Fisha

Fog threatened to kill the trip right from the start, but with our combined superpowers we managed to burn through the groundcover by thought alone...or it just lifted. Either way we were gone, perched atop Diggler's magic carpet and makin' good time to the flow.

Was it Epic? Yes.

Did we slip and slide on bear poo through the Jungle? Mmm-hmm.

Did Ratbone acquit himself well after the initial losing of his mind? Sure thing.

Did we hook more huge fish than should be legally allowed in any single lifetime? We are gonna take the fifth on that one.

Were we just one banjo short of a scene straight outta Deliverance? Yup.

We'll give full lowdown on the Mist River in a bit, after we have time to order our thoughts. For now, we'll just leave you with this incomplete photo and have you fill in the blanks.

Barring any weirdness on the work front, we will be flexing our fishing muscle pretty much nonstop all weekend. Work probably WILL interrupt our plans, but we're used to that by now. Oh well, a fella can dream, no?

Rathbun of Piscine Biathlon (and Moldy Chum) fame will be hollywooding his way into town this weekend to spend some quality time with our friends the fish. Weather permitting, we're gonna fly back up to the Mist Valley and see if we can't get a win on the road against some big bruisers. Also on the menu are jaunts to a few of the local flows, a crabbing excursion, the eating of much steak, and of course the obligatory excess drinking that is an integral element of any properly staged Piscine Biathlon, home or away - anyone know of a good stretching routine for the liver?

Game on in less than 24 hours, Fisha. Hopefully we don't look like this guy when it is over. 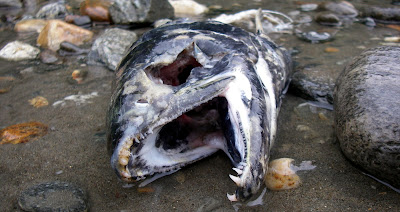 Got a new horse, a new saddle, and a new hat...Not sure what the horse will do, the saddle ain't contoured to our butt yet, and the hat (as always) is a little tight.

After 7 years, several rebuilds, many spare parts and at least 2 total system scrubs, Old Glue bit the dust. Hopefully, the last 3 years of our photography and writing endeavors can be rescued from his charred carcass. Our head Slavedriver of an editor has assured us that not only is this possible, but it damn well better happen soon.

Old Glue, being attended to by the resident IT geek. 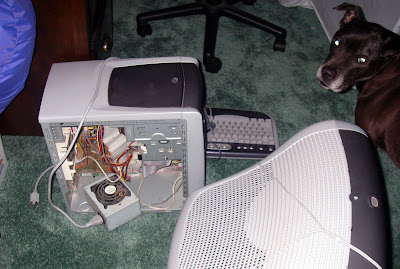 The New Horse -keys feel a bit funny, none of our old complimentary software, but with a big ol' honkin' 22" flatscreen which, in case y'all haven't noticed, lets us work in 1600x900...if you have an old 950x600 monitor, you will just have to bear with us as we point and laugh at you. Sorry. 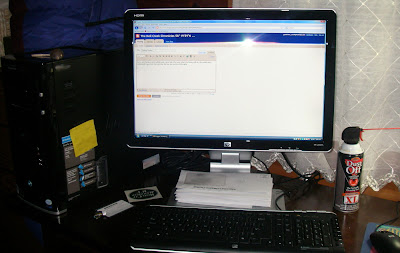 Now all we gotta do is get some time off to fill up the new photo archive. Ran a small tidewater sortie this evening, tag-teaming a local with the Fanz. 4 holes, piles of fish, in-n-out in 43:22.09...We should be in the damn Olympics or somethin'. 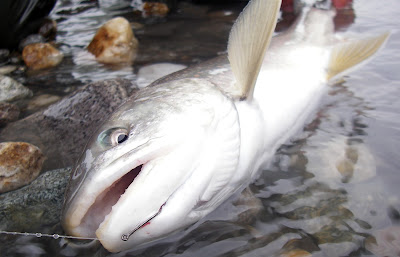 The IT wing of the Neil Creek Mansion and National Monument has experienced a meltdown...That's right, the dreaded "Blue Screen of Death".

So we write this from the office computer, wondering how we are going to celebrate the impending birthday of The Chronicles, and wondering how much a new 'puter is gonna set us back.

Tomorrow, The Chronicles will have been up for a year, and as soon as we have some time we'll recap and maybe set a course for the pirates in the upcoming year.

Oh, yeah...HoJo and Diggler are gettin' married tomorrow, too. Wonder if they did it in honor of us?

Hehehehe.
Posted by G_Smolt at 9:54 AM No comments:

Got a reprieve from hard labor the other day. It was only for the last 2 hours of sunlight, but it was release nonetheless. Scooped up the gear, the beer, and the Fanz, then hit a local out on the flats that has a decent low-tide show.

We were gonna make a few stabs at wry and witty, throw in a big word or two, but let's face it: We're tired. We do physical labor for a living, and we're right in the middle of the show.

We'll be back to ... We're gonna stick with pics until things slow down.

Dammit. That wasn't an egg.

The Fanz, catchin' big fish in the desert...Check the old-school medalist, peeps. 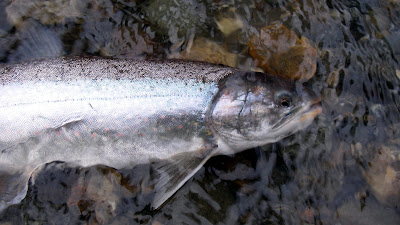