Diggler, Killer K, Us, and Cap'n K got a collective wild hair yesterday and we all decided to do something about it.

Being rational human beings, we were capable of seeing the situation for what it was - no rain, huge amounts of snow, super-low flows, night temps still dipping below 28° - not exactly nature's thumbs-up for a productive trip.

However, we all contracted a bad case of gedouddatownitis on the same day. Phone calls were made, targets were discussed in hushed tones, modes of conveyance were selected, and a game plan was put together.

The First Trip is best conducted as a prelude, a warm-up, before any real excursions are undertaken...a dry-firing, if you will. This way, items that were left in haste or not remembered the night before are laughed off, and the consequence of absence is not as acutely felt. Some things, however, are best remembered whatever the tone of the trip.

When you forget your wading boots, it is always best to steal a friend's Xtratufs and make new ones... 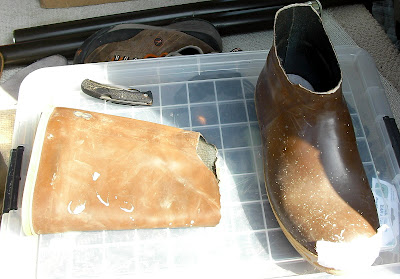 We didn't really expect to see much, other than what we already knew but blocked from out eternal optimist's minds- the snow was high, the water was low, clear, and cold, and for the most part, there was a distinct absence of piscine life to be found. We did spot a few chilly fish doing their best impersonations of ostriches with their heads buried in rootwads instead of sand, a sure sign that the home team wasn't ready to play quite yet.

The birds were out in full force, with a cloud of whitefronted geese honking like 3pm on the LA freeway for most of our trip. They were interrupted only once, by a stately procession of trumpeter swans that swung in for a look-see and then continued on up the coast. We managed one crappy picture on their easternmost swing, but even fuzzy, it is still pretty cool.

After much poking and probing, a little gazing, and some minor contemplation, we accepted the fact that it wasn't going to happen today. No worries, though - good friends, a few beers, low expectations, a walk in the cold spring sun... 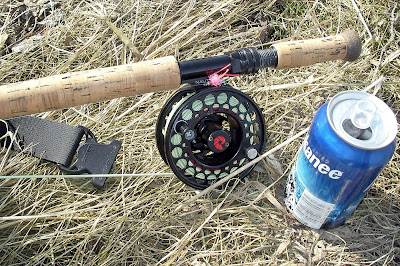 Shakedown for the new season.

Just about fully recovered from FolkFest.

Many tunes were picked, many beers were drunk, many hours were spent in, beside, with, and around music as made by both amateur and professional musicians. We got the chance to catch up with a few folks we haven't seen for years, and got to pick well into the daylight with like-minded citizens of the string.

We're not gonna type much more, partly because the folkfest experience is an event that must be experienced live, in real-time, to be fully understood. The whole undertaking would be somehow cheapened in a simple, linear translation, and so many portions of the scene need to be viewed in situ to make much sense at all...

...But mostly, we're not gonna type much more 'cause our fingers still hurt like hell from the saturday night sauna jam - once again, you had to be there.

Scenes from a lost weekend. 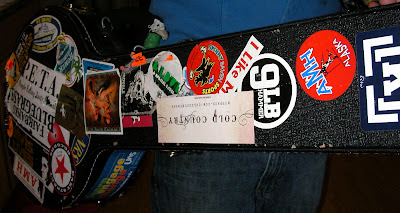 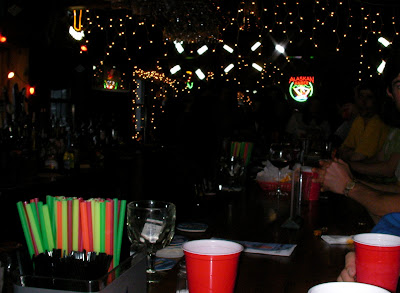 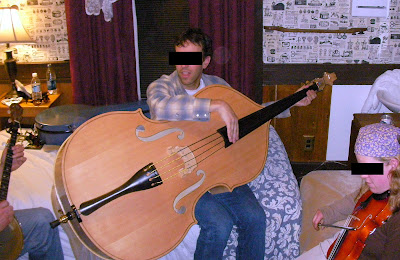 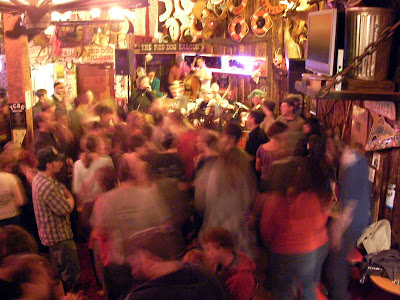 And for your listening enjoyment...

Prelude to a Good Time.

Ok...last-minute prep for the first all-nighter this year. 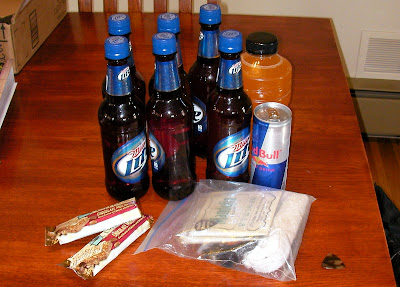 Beer - Check. Bar closes at 1, gotta have at least a stash of fuel to keep goin'.
Granola bars - Mm-hmm.
Extra Strings - Check. 2 packs this year...we're fast learners after last years' stringbreakathon.
Extra picks - But of course.
Various n' Sundry Luthiery Kit - Yep. Beats listening to somebody's cheap annoying buzz all night.
Gatorade - Got it.
Red Bull - Artificial 3rd wind.
All we're missing is the double cheeseburger that will get us over the 5am hump until the coffeeshops open, and we're good to go to the first big evening of this year's FolkFest.

We'll bring a camera, naturally, but we're not gonna promise anything legible or intelligible for at least 4, maybe 5 days. During that time, we will once again attempt to drink our own weight in beer, eat more corndogs than is good for a fella, play tunes until our fingers blister, bleed, then blister again, have as much fun as one human being is maximally allowed in any calendar year, and generally blow it all out in one last throwdown before fishing season begins.

We got the Laurel all decked out with new wires and a shine job, somethin' she don't get but once a year. We played a little warmup session at lunch with a few of the boys, and all signs point to go for a good 120 hours of music.

A few pics from last year, to get y'all in the mood. 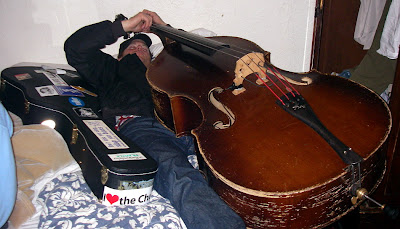 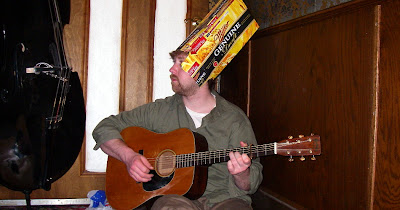 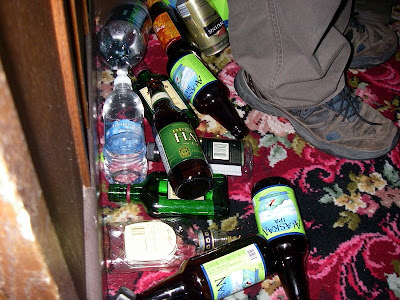 FolkFest, fools. Git'cher pick on.
Posted by G_Smolt at 5:06 PM No comments:

When judged on the merits of relative intelligence, beauty, or personality, farm animals and tubers are on the lower left end of the scale.

However, if cooked in just the right amount of butter, salt, and pepper, they become things of sublime beauty and toothsomeness.

When paired with fine coffee, Breakfast Nirvana is reached. 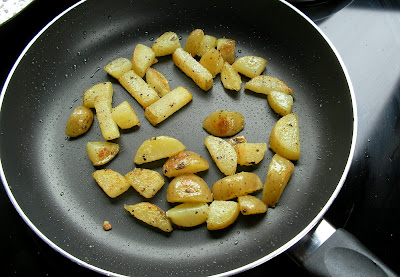 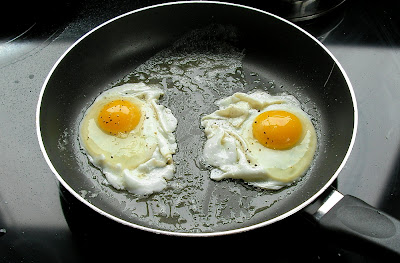 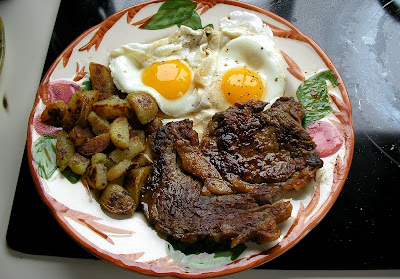 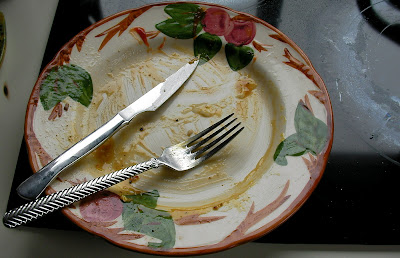 Got an email from D-Gro earlier today, with a few words and a set of pictures that tell a long story.

Seems that D, Lawnmower, and the Dirty Hippie were gonna get a jump on this year's steelheading by taking a ski-plane into one of the many flows around here. Good thinking, provided the meadow that you intend to land in doesn't have 30" of fresh pow over a rotten crust...

...After 5 hours of digging, pushing, shoving, sweating, and swearing, they finally got the plane turned around and onto a snowshoe-stamped runway. Little did they know that the should have just cut their losses and come back with the magic carpet.

We're sure they had fun, though. First tracks on any river is always fun, even if there is 8' of snow on the bank and 65 cfs in the channel...


Notice the ditch dug by the belly-tank. 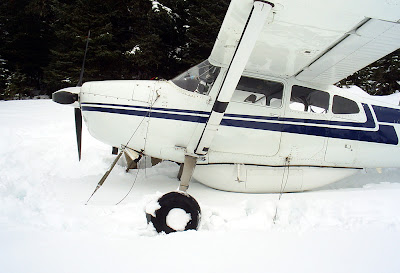 Apparently, everything had to come out of the plane to unstick it. 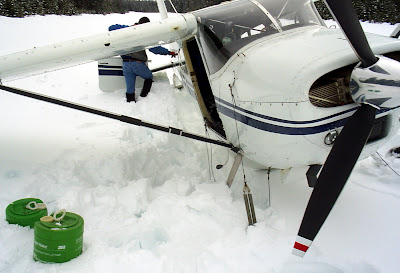 Dirty Hippie pushin' a wing with Lawnmower tryin' to reel in the port-side...D-gro, well away from where any actual work was happening, snappin' pictures. 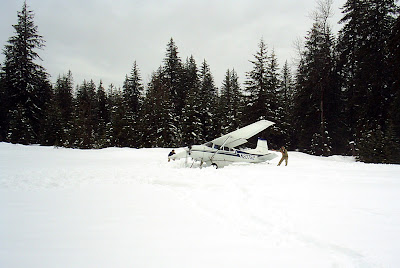 There's always next time, boys. Give 'em hell.
Posted by G_Smolt at 6:59 PM No comments: