We got your click and pawl right here, jack.

Y'all have probably heard our stance on tradition, so we won't repeat it. But you prolly haven't heard that we HATES clickyclicky reels. Detests. Loathes. Right up there with yelling "Fish On!" in anything but an ironic manner - and then only amongst friends - or typing "Tight Lines" on innerweb message boards.

Anything that makes a racket is right out, and if our attempts to silence the reel will result in the reel not working, then we don't get it.

Every now and then, we have to make exceptions to this rule - but when we break it, the reel should sound like the purring mechanism of a fine timepiece, not some crazed French-Canadian lumberjack hopped up on meth.

Until a few days ago, we had only broken our "no dumb-sounding, Hey-Everybody-I-Got-A-Fish reels" a few times -Abel super 10 double-pawls can't be click free, but they RULE king salmon, and the Ari t'Hart triangles are just too sexy to mind that little whirring noise they make. Besides, both of those reels (and the sexy little Nautilus NV we picked up last year) are comparatively quiet, so while you might hear them close up, they don't fill the canyon with the strains of what sounds like a pile of screwing cats on acid.

So, we went and did it again. New twig, we figured, needs a new line-winder. That sexy little fish pole in the post below NEEDS a new reel, and some cat-scratch, cement-truck-sounding, "Traditional" Made in Korea reel wasn't gonna fit the bill. 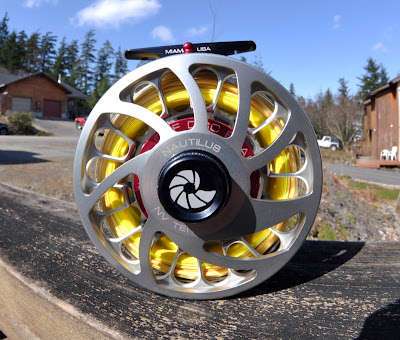 Holds fly string nicely, glints in the sunlight provocatively, has tolerances that would make an engineer heady with lust, and doesn't make any unacceptable noises.

Comin' up on less than 2 weeks, kids.

Yesterday we took delivery of one we've been waiting on for awhile.

Of all the two-handed twigs we have hucked in the past few years, the 6126 is the king...dunno why, but most of the 6126's that we pick up just FEEL right, with a few notable exceptions. One of those exceptions is a major rod-maker (name starts with an S) with a light-green 6126 that for some reason we just can't feel the love in - but most others, we're down with. Up until last night, our go-to 6126 was the Beulah Platinum, a sweet stick if there ever was one. Tip-light, stiff enough to move line without a lot of oomph but soft enough to let you feel it in between the hands when you are groovin', and with a very fast recovery for those tight little underhand loops.

That was then, this is now. 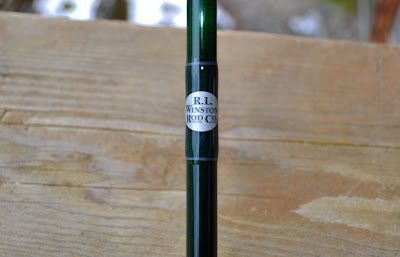 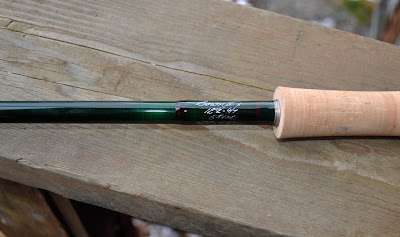 Went and hucked it around a little with MoneyMike before we were snowed off the crick...let's just say that with a custom 36' 430gr long-taper and about 18' of leader, you need an out-of-state license to fish this twig.

This doesn't mean we're putting the Beulah out to pasture, mind you. That twig is hard to beat for tip-work on most fish under 15lbs or so, and with a chopped Tonic 23 1/2' 450gr and about 13' of t-11, there ain't a whole lot of effort required to fish flies the size of small farm animals all day.