Are we finished yet?

That's when we got done with an order for some saltwater dude, 2 dozen custom flies for big, nasty fish.

Any fly that is over 10", has hook(s) larger than 5/0, or requires hair-grooming tools and products to manage and manipulate the materials constitutes a big deal in our book. Rest assured that we're gettin' a pretty penny for all the effort, but we don't think the Wife is gonna let us take on any more "custom orders" - she didn't mind the hair-dryer trick, but she drew the line at the use of her $25 a can hairspray.

Besides, we think we're allergic to bunny-fuzz. If we weren't before this, we sure as hell are now.


Just for reference, that's a 6" straightedge. 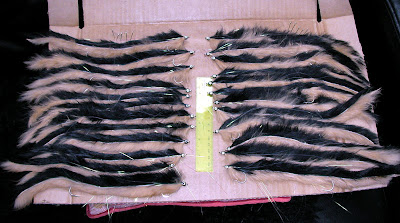 The ONE bubbly epoxy job in the whole bunch, and we get a close-up of it... 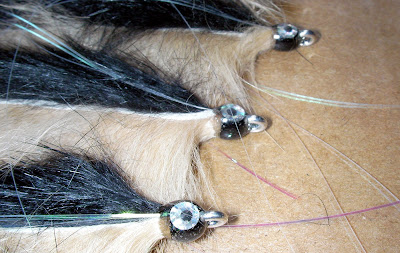 Just in case you missed it, the Sushi Party was last night.

If you have to ask, "Uhh...which Sushi Party?", then you missed it.

Now in it's 8th year, the Sushi Party started as a small festivity, a gathering of a few friends to celebrate the Gonger's birthday in the dead of winter. What once occupied the dining room of a modest downstairs apartment has blossomed into a fete that takes over entire homes in the Juneau area, garages included.

Over the years, new tricks and treats have been hauled out for the amusement of tout le Juneau at the Sushi Party. Pastry cones filled with poke, topped with watercress. The famous Surf n' Turf roll, featuring a seared strip of New York steak nestled in with a King Crab leg, topped with grated horseradish. The Tuna Explosion roll, described as "tuna, with chopped tuna, wrapped in tuna". The Gonger's signature art sushi. Every year we try to bring something new to the game, and the Gonger does his part to advance the art as well.

This year we brought the Ika-Ika roll. Squid, stuffed in squid, topped with sea salad. Strange looking, but oh so tasty. Not to be outdone, the Gonger spent a small fortune on a block of Bluefin chu-toro, as well as 3 pounds of premium maguro. Copious amounts of nigiri-zushi were put to offer by the Gonger, while we held down the makizushi and uramaki end of things with our ninja-like rolling skills. As with any good Sushi Party, sake was consumed by the gallon, and rice beers were to be had at every turn.

Images from the evening.

The calm before the storm. 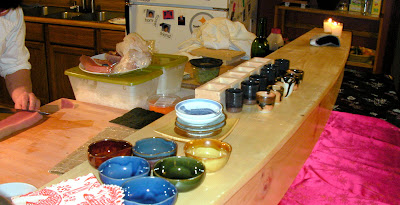 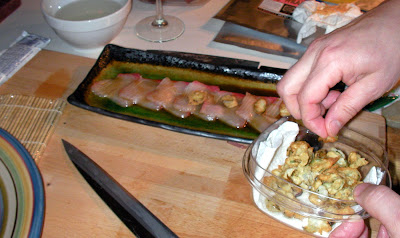 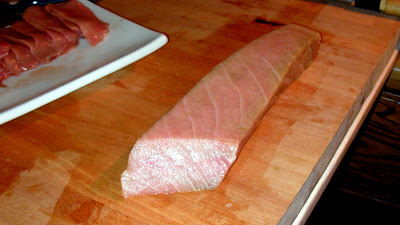 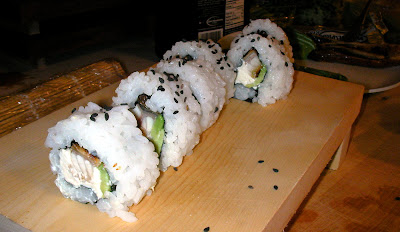 Have some sushi with your tobikko, mmm? Sockeye roll. 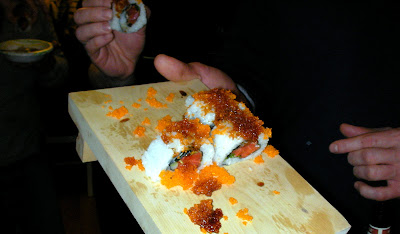 Tunirvana Roll. Tuna and unagi on the inside, tuna and avocado on the outside. 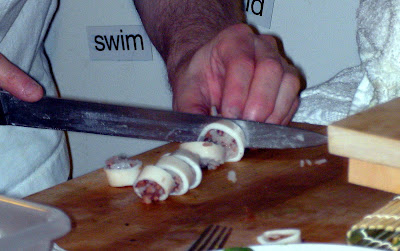 The Gonger and his art sushi. 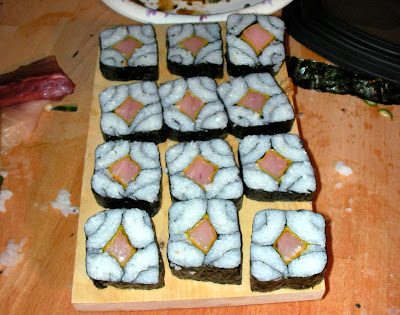 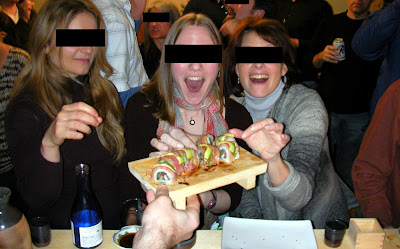 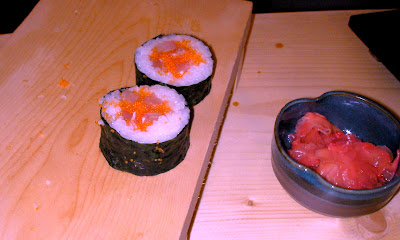 If you haven't cooked with a torch, you haven't really cooked. New York steak with sesame oil, yuzu, scallions and ginger...5 seconds with the torch. 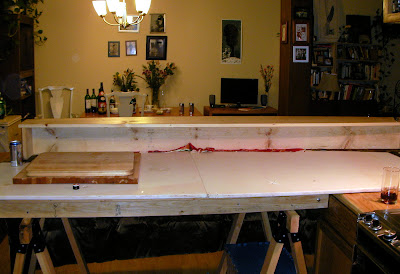 Sushi Party '09 is in the bag...that must mean that spring is on it's way.

D-gro sent us an email from Baja Sur the other day, ostensibly to say hi, long time no see, but also to rub his recent tropical fishing success in our cold runny nose.

It is a good thing that D finally got some sun. Possibly the whitest man in AK, D-gro lets his Minnesota roots show by wearing tube-socks in the boat...as if a Fisha never heard of tevas.

It ain't steelhead, but it DOES look like fun... 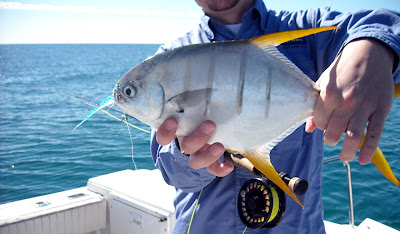 We cropped the socks out of this one - we can't let a fisha be seen in such a state. 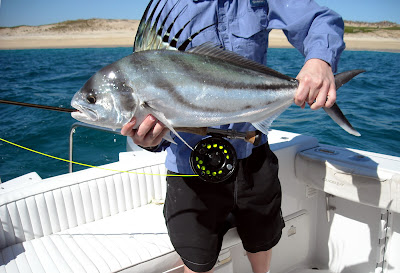 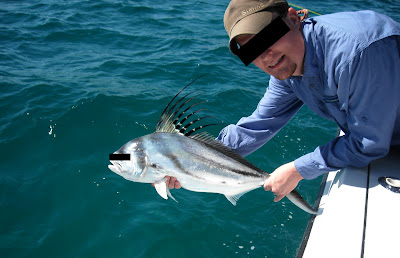 It wouldn't be complete without the obligatory food shot. Some small cantina, some hot afternoon, some cold beer and spicy salsas. 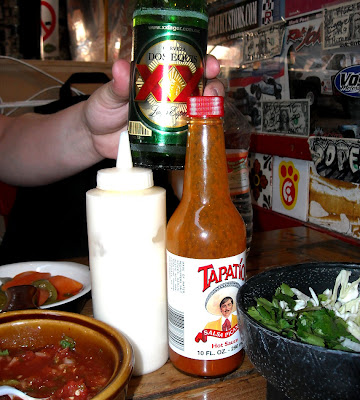 The Wife is in TX tending to familial matters for the next week, so we're holding down the shopping duties for the staff of the Neil Creek Estate. Lately, the dog has become more finicky in his eating habits...not sure if it's just old age coming to roost, or the fact that maybe he really likes it when we get down there next to his food bowl and spoon-feed him an entire can of "chicken chunks in gravy". At any rate, the pooper-fuel of choice is now a toss up between the aforementioned chunks and "meat loaf for dogs", a smooth greyish paste of ambiguous origins. The meatloaf is probably easier for his near-toothless mouth to get around, but he seems to like the bite-sized offerings of the chicken chunks, especially with a little bacon grease - but then again, he once ate a cardboard box that had bacon grease on it.

With the nutritional needs of the Supreme Leader taken care of, we had a chance to do a little shopping for ourselves. We managed to navigate the supermarket without getting lost, and we would like to believe that we have met our basic nutritional needs for the week to come. With the addition of a few green things - vegetables, not unintentionally green things - it appears as if we might survive this week in relative comfort. 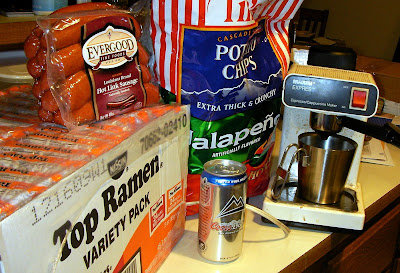 Full transcript to be found Here
Posted by G_Smolt at 11:57 AM No comments:

Remember when we said things was happenin' fast around the Neil Creek Estate?

Well, RoadTrip '09 is already upon us. We didn't even have time to brush the gingerbread crumbs off of our fronts, to wipe the turkey drippings off of our chin, and we're already leaving.

This time we're off to Denver, CO, for the Fly Fishing Show. For the third year in a row, we are donating our time and our tongue to the Sportsman's Alliance for Alaska in an effort to get the word out about the proposed Pebble Mine project. We'll be showing Red Gold in the "adventure theater" on a daily basis, as well as at the booth on a brand-spankin'-new laptop...not ours, but a loaner from Timbo.

If you find yourself in the neighborhood, feel more than free to come on over and check out what we have to offer, or just say Hi. Either way, we'll be happy to see you.
Posted by G_Smolt at 11:43 AM 2 comments: